Wildlife Trafficking: Is a Fourth Protocol to UNTOC the Answer?

In 2019 containers filled with pangolin scales and elephant ivory were seized in Singapore. The seizure contained 11.9 tonnes of scales from pangolins – a small mammal with a scaly exterior that rolls into a ball when threatened making them easy to capture. Almost all pangolin species are considered critically endangered by the International Union on the Conservation of Nature. The passing of zoonotic viruses from wildlife to humans, such as the pangolin – a potential carrier for COVID-19 – reminds us how closely we are connected to nature. Attention has been called to the lack of a global framework on transnational environmental crimes. Such calls have only increased with the realities of the COVID-19 pandemic being linked to wildlife markets.

Researchers are identifying the various types of networks involved in wildlife crime, including traditional organized crime such as drug cartels, but also disorganized networks and corporations. Green criminologists have looked into Chinese organized crime involvement in wildlife crime in certain regions like the Golden Triangle, and the presence of drug cartels near the Sea of Cortez in Mexico who are allegedly involved in the illicit trade of totoaba maw (fish bladder). But how different organized wildlife networks around the world operate still needs to be better understood. The illicit wildlife trade is diverse, with various species and a multitude of different actors. Wildlife crime can be considered serious crime in terms of the players involved in some transnational networks, but it can also be considered serious due to the implications to species, habitats, and human health.

Five major international organizations, the World Bank, CITES, World Customs Organization, INTERPOL, and the United Nations Office on Drug and Crime (UNODC), came together to form the International Consortium on Combating Wildlife Crime (‘ICCWC’). ICCWC partners have tried to address the illicit wildlife trade through various programs and supports. Large-scale global operations are spearheaded through INTERPOL via global seizure blitzes targeted at certain trades. Enforcement operations can be facilitated through INTERPOLs Wildlife Crime Working Groups annual meetings. Further, the UNODCs World Wildlife Crime Reports have solidified the international scope of the Illicit Wildlife Trade. CITES, the convention that regulates the legal trade in wild animals and plants, has limited capacity to respond to illicit trade in a meaningful way and faces some implementation challenges (including in Canada).

UNTOC may be used as a basis for cooperation in wildlife cases that meet the threshold of ‘organized crime’ – but given some countries do not yet treat wildlife offences as serious, this can be a barrier to its use. UNTOC does not appear to be used much in wildlife trafficking cases. In a recent UNTOC case digest, over 100 organized crime cases (mostly drug trafficking and money laundering) that utilized UNTOC around the world were analyzed – none of which specified the trafficking in wildlife. The current review of the implementation of UNTOC may provide more insights into the application of that convention. However, as green criminologists are already identifying – wildlife crime has a diverse set of actors and does not always correspond to the traditional structure of ‘organized crime’ and may therefore require a more appropriate framework.

Past CITES Secretary General, Mr. John Scanlon, with NGO End Wildlife Crime drafted a fourth Protocol to UNTOC ‘Protocol on the illicit trafficking of wildlife’. The draft agreement was presented at the Commission on Crime Prevention and Criminal Justice (CCPCJ) in 2021, and supported that year by Costa Rica, Gabon, and Angola. In May of this year, the CCPCJ adopted a resolution on “Strengthening the international legal framework for international cooperation to prevent and combat illicit trafficking in wildlife”. The resolution invites Member States to provide UNODC with their views on possible responses including the potential of an additional protocol to the UNTOC  to address any gaps that may exist in the current international legal framework to prevent and combat illicit trafficking in wildlife.

If State Parties to UNTOC adopt a wildlife trafficking protocol, it will not be a catch-all solution for dismantling transnational wildlife networks – implementation by each nation would have to criminalize wildlife trafficking sufficiently. It would be up to countries and practitioners to utilize an agreement to cooperate successfully. Further, new international agreements take time to be drafted and adopted, and even longer to see effective implementation. Challenges in transnational wildlife cases currently exist inter-regionally, such as evidence repatriation of large, seized wildlife exhibits in some regions.[2] Any new framework should aim to alleviate current barriers to cooperation, such as inter-regional evidence procedures and other challenges investigators currently experience in transnational wildlife cases.

A Step in a Green Direction

Forming an adequate response to international wildlife trafficking needs to be a top priority if UN Sustainable Development Goals 14 ‘life below water’ and 15 ‘life on land’ are to be achieved. The adoption of an international protocol on wildlife trafficking may assist countries from different regions in collaborating more efficiently. Such an agreement would also signal that international community members are placing serious attention on global biodiversity exploitation. Although the draft protocol aims to increase cooperation to address wildlife trafficking, and is not an agreement solely meant to protect species, it is worth noting that according to the IPBES policy report on global biodiversity ecosystems are deteriorating and biodiversity is in decline. Stopping illicit wildlife trade is one component of many that is needed to address the overarching problems. The draft fourth protocol may be a progressive first step from the international community towards solidifying the recognition of crimes against the environment, including wildlife, as serious crime. 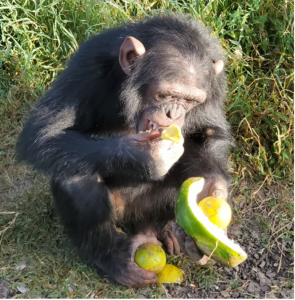 Rescued chimpanzee at Ol Pejeta Conservancy in Kenya at feeding time, where many chimps who were once illegally traded to be pets, now reside.